Power of Many, Relationships Shared in TSD Opening Keynote Address 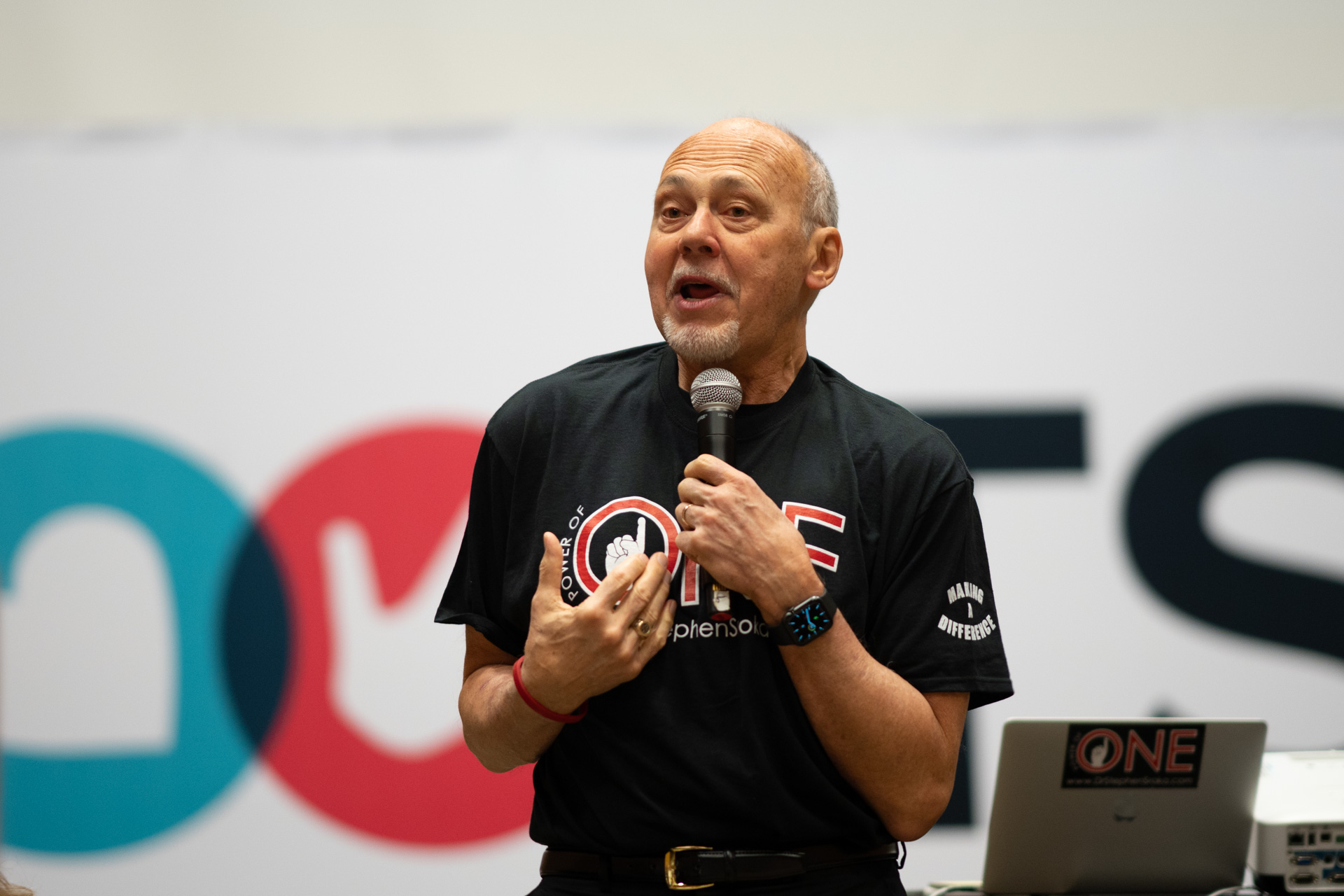 FRISCO, Texas — When meeting Dr. Stephen Sroka for the first time, he hugs you twice. The second hug, he said, is from the heart. This was one of the many lessons taught to him over the years that he shared with the attendees at the 2022 Transporting Students with Disabilities and Special Needs Conference on Wednesday.

During the opening general session of the TSD conference, “The Courage to Live and Lead in the Face of Adversity: It’s All About Relationships,” Sroka used various visual representations to explain the “Power of Many.”

Instead of taking off his suit to reveal a Superman costume, he instead revealed a shirt that read “The Power of One.”

He went on to describe the importance of relationships, especially the connection between school bus drivers and students, which promotes safety and respect. He advised all professionals in the room to be cheerleaders, as no one is going to speak up for the school bus drivers in this country except for the industry itself.

He explained that he had a rough time in school as a child, recalling how his peers called him names. He navigated ADHD and a speech impediment. Despite being told he didn’t have the IQ for college, he said he had the will to succeed, which resulted in him becoming a doctor.

Sroka explained that the school bus is a very vulnerable environment, usually containing one adult and a bus load of children. He advised school bus drivers to not plan for “if” something is going to happen, but “when.” He noted that in today’s current environment, with all the challenges surrounding school transportation educators need to be aware, assertive, prepared not scared and to advocate for safe schools.

He noted he’s amazed with how many school safety programs don’t include school bus drivers or anyone in transportation and added that safety programs need to be balanced and comprehensive. Sroka advised keeping everyone in the community up to date and prepared for any type of emergency and what to do in a crisis. Just like no children are the same, he said, there is no one size fits all to keeping students safe.

Sroka broke down three important lessons he has learned throughout his career.

Mental Health is Huge. He noted that especially following the COVID-19 pandemic, many students and community members are carrying around a lot of baggage. Sroka explained that there is no right program for every student, but instead everyone learns a little differently. “In America, what is measured is treasured, but not everything that counts can be counted,” he said.

He noted that in order to make a difference in a child’s life, one must first get to the heart. Sroka said that hurt people, hurt people, and it’s an educator’s job to help people, help people. Often, he said, people yell at people they know can’t yell back.

Words Work Wonders. Sroka added that words people say matter, and words help to build relationships. This is the power of one, he said, adding that it’s not about changing the world, but instead changing one action at a time.

“The tongue has no bones, but it is strong enough to break a heart,” he said. “So be careful with your words.”

Building Relationships are Key. Sroka broke down the steps to excel at communication, which includes the three Hs: Honesty, Humor and Hope; three Ls: Look, Listen and Learn; and two Ss: Smile and Say ‘Hi.’

Following his 50 years of teaching, Sroka said he’s found that facts are forgotten but feelings last forever. Students remember kindness, as opposed to content or curriculum.

Gomez, who has been an educator for 20 years, said he’s going to work with his staff on building a culture of collaboration. “For us, we contract out our [transportation], so it’s collaborating with everyone and getting those bus drivers to believe that they are the most important,” he continued. “Like the doctor said, in the morning they are the first person the kids see and the last person they see in the afternoons getting off the bus. Trying to be the motivation and inspiration for [my drivers] and letting them know they are not out there on their own, we are a family, and we are a team, and together we make wonders.”

Sroka concluded his presentation by leaving the audience with three life lessons:

“His keynote presentation was really good. He’s really engaging and does teach you things you need to learn,” Amanda Woolstenhulme, lead school bus driver for Idaho Falls School District #91 told School Transportation News following Sroka’s keynote. “We’ve got to start looking at our kids as whole individuals and not just a grade. They are kids, everyone has problems. And we need to look at them as that, and not as a disciplinary.”

Woolstenhulme added this is her first time attending TSD and hopes to take back solutions to behavior challenges on the school bus.

Gomez is also a first-time attendee at TSD and said it’s been one of the best conferences he’s attended so far. “I looked over the agenda and I’m really impressed with the presentations that are forthcoming,” he said.

Meanwhile, Jihan Nelson, the director of special education at Crook County School District in Oregon, said the keynote was positive, and inspirational and sent a really good message for educators to be reminded of a time that may seem stressful.