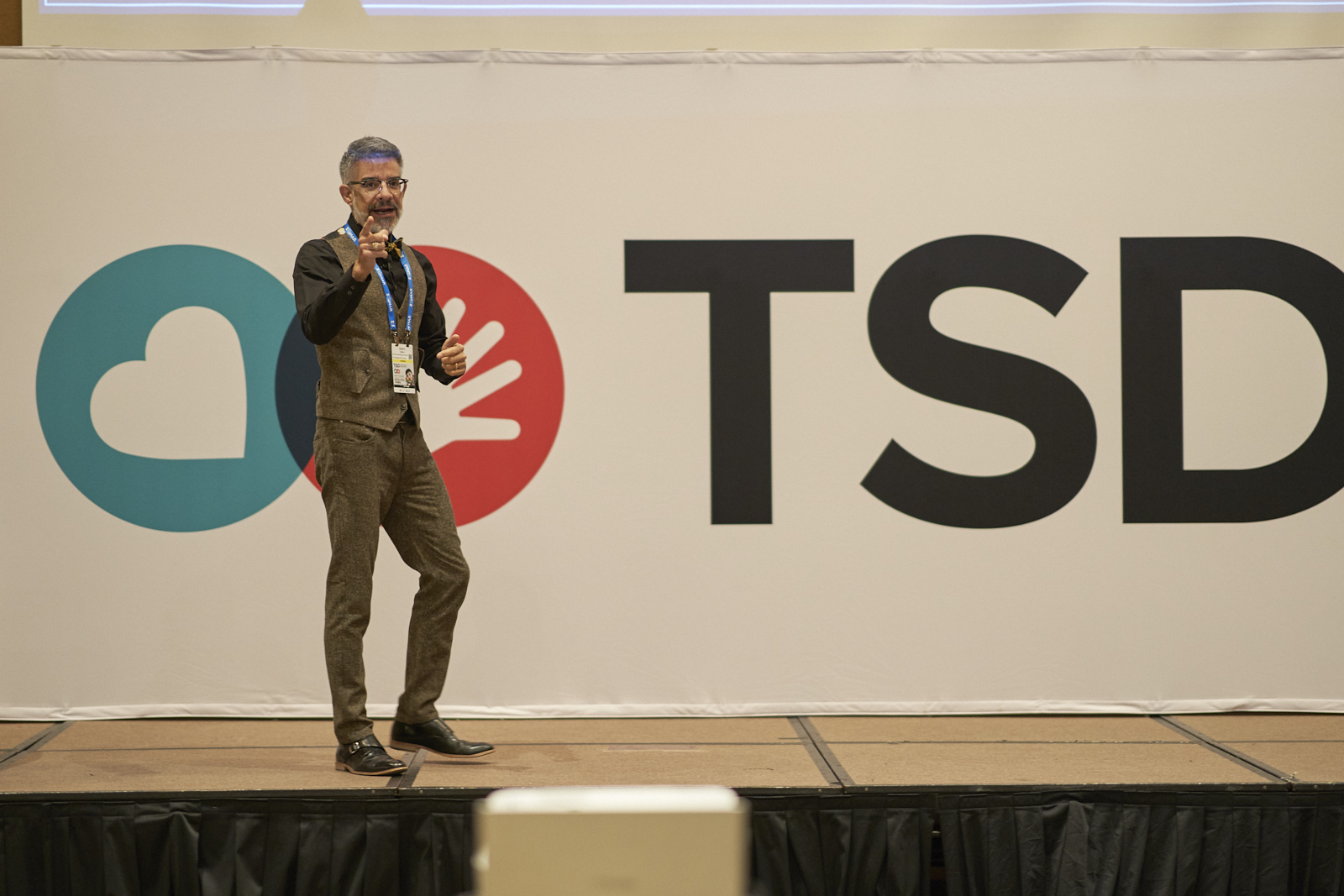 FRISCO, Texas — Attendees at the keynote presentation, “Mental Health First Aid on the School Bus,” by Adam Saenz, Ph.D., at the Transporting Students with Disabilities and Special Needs (TSD) Conference didn’t get to sit down right away. Instead, Saenz took attendees through a myriad of stress-relieving exercises.

Take a minute, he said Saturday morning before the TSD Trade Show, and roll your neck in your circle, reach your arms across your body, and touch your toes. Then he walked attendees through a breathing exercise, in which he coached everyone in breathing in, holding their breath, and breathing out.

“You are now more relaxed than you were two minutes ago,” Saenz said, adding that adrenaline and cortisol cause the body’s fight or flight response, which ultimately causes our breathing to speed up and our body to feel stressed. This morning, he said, it only took a short amount of time to mindfully shut off that response and get our bodies into rest and digest.

Saenz then walked attendees through his childhood and how he was one of the at-risk students that no one could seem to get through to. Throughout his childhood and into his early adult years, he was depressed, overwhelmed, doing drugs, and felt like he would never amount to anything. His mother relinquished her parental rights to him. He accepted that is who he was going to be.

However, he attributed his later academic degrees and professional and personal successes to two teachers that saw something in him. He had moved to a small town in Caty, Texas, and in with another family that showed him love. Though at 18, the family told him he was on his own in life. When he graduated high school, the teachers wrote him letters expressing their beliefs that Saenz would achieve greatness one day. But those words haunted him, he said. Eventually, after working as a fast-food chef, Saenz decided to put himself through college, as well as obtain his master’s degree and his doctorate degree. Currently, he is a school psychologist and author.

“I want to prove to you, you do not have to be a licensed psychologist to make a difference in a kid’s life,” he said.

He explained that he never would have emerged from the pre-convinced perception of himself had it not been for the two teachers that believed him. They were educators who had invested in him. “My life is proof that any type of kid you are working with, you as the adult have the power to make a difference in their life,” he added.

While he noted that school bus drivers are not meant to be therapists, and instead are required to safely transport students to and from school safely, they can foster positive relationships with the students they transport.

Saenz added that physically, bodies will be healthier when they’re relationally connected. Plus, he said they are less likely to experience mental illnesses, like depression.

Reflecting. This entails moving beyond one’s job and identifying their calling. When people realize they are performing their purpose, better results follow. The audience’s purpose is to provide transportation to students with unique needs, he said.

He explained that school bus drivers are helping students get to school, and therefore helping them achieve their education. “We need to be connected to our sense of purpose,” he said. Saenz noted that sometimes when people really don’t want to be in a certain place in life or at a certain job, and they go through the stages of grief: Denial, Anger, Bargaining, Depression and Acceptance.

When people get to the acceptance stage, he said, they usually recognize that while this is not what I want, this is where I am at. Once that stage is reached, people can learn to grow where they are planted.

Saenz added that healthy relationships don’t happen naturally. They take work. He noted that for people who don’t want to remain in their current job or role, or if they are in it for the wrong reasons, then they won’t have the resources to initiate and maintain healthy relationships.

For people to understand their emotions, he said, they need to identify the feeling, link the feeling to a behavior, and choose a substitute. For instance, speaking negatively about a supervisor or a student won’t help grow those relationships.

He noted that people don’t want to be around other people who engage in hurtful behavior, which in turn hurt relationships. He added that if someone is prone to express emotions inappropriately, they will sabotage their ability to build healthy relationships.

Connecting. This is the essence of having an experience that is understood as being shared. Saenz explained that while he and attendees were at the keynote presentation, they were sharing time and space and therefore connecting.

He noted that when making relationships, people want to feel safe, and therefore connect with people who are like them. Those with the same values, beliefs, maybe even those that look the same or similar.

However, he asked what if a student who rides your bus isn’t like you? Or their parents aren’t like you? He said the job of a bus driver is still to connect with them. He noted there are two different ways to connect. Contingent communication is based upon the completion of a task. Non-contingent communication, Saenz said, is asking questions like, “How was your weekend?” and “How is your brother doing?” These types of questions deeper the relationship between two individuals. This is the type of communication that should be happening with students and bus drivers, and even in transportation departments in general, he noted. Plus, he said the difficult kids and those who may not have the same ideas as others, are the ones that drivers should go out of their way to connect with.

He added that students want to perform for adults they feel connected to. Saenz added that by nature, humans are relational creatures and building connections across differences is necessary for relationships to thrive.

Protecting. Protecting is about setting boundaries to establish what belongs to a person. Perhaps this means protecting their possessions, feelings, their thoughts, their bodies, or their loved ones. He noted that beliefs drive perceptions, which drive behavior. The same holds true in reverse.

For instance, a person believes they have value and therefore expects another person to treat them with the value they deserve. And the respect and value will differ from person to person.

“When you show me that you will treat me with value, you can come back in,” Saenz said of establishing boundaries. People who don’t think they have value will allow others to walk all over and take advantage of them.

In closing, he said that self-protection is a basic human instinct, and setting healthy boundaries is necessary for relationships to thrive. However, he noted that sometimes instead of building a fence to keep people out, a building bridge might be necessary, to see what people are going through and how to meet them in the middle.

Every day there is an opportunity to not necessarily fully connect, but to engage in each student, said Shawn Woods, director of safety for Apple Bus Company, following the keynote. He noted that drivers can ask how students are doing each morning or afternoon. Woods said Saenz’s talk had a unique take as he blended his personal experience with professional knowledge. “I really enjoyed this session,” he said.

Woods said he has many takeaways from the presentation, like the importance of focusing on challenging students and turning negative situations into positive ones.

Attendee Peggy Miller, the training supervisor for Conroe ISD in Texas, said that she is bringing the topics discussed back to her team to help build them up, while also soliciting more support from them. This presentation not only resonated with what she does every day, but she can also move it toward the school bus and building relationships with students and drivers.

“I know you can make a difference in anyone’s life if you put in the effort,” Miller said, who is on her fourth year in attendance at TSD.