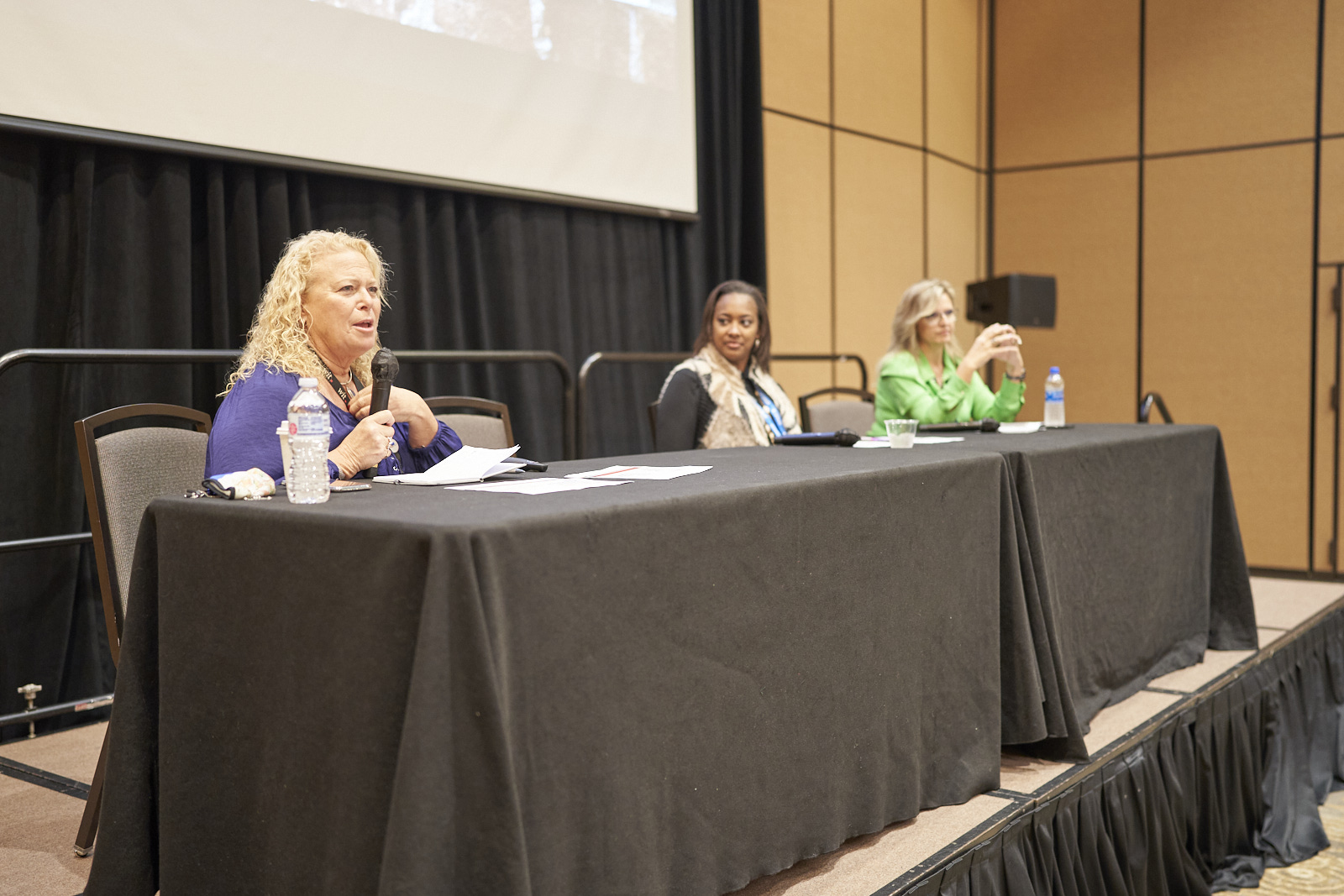 FRISCO, Texas — The perfect transportation operation would be one that’s fully staffed by employees who actually want to be there and who never call out sick, with enough ridership capacity for every student, and no road construction or traffic to contend with.

But there is no such thing as perfect, especially when it comes to transporting students, and those with special needs no less.

A Sunday morning general session at the Transporting Students with Disabilities and Special Needs (TSD) Conference not only reminded attendees of that fact but provided considerations attendees can make to develop contingency plans in response to a number of challenges. TSD Conference Tenured Faculty member Alexandra Robinson steered the discussion with Theresa Anderson, owner of TM Anderson Consulting and Region 5 director for the National Association for Pupil Transportation, and Rosalyn Vann-Jackson, executive director of enrollment and support services at Broken Arrow Public Schools in Oklahoma during the session “Developing Contingency Plans for Student Transportation.”

“Sometimes, where we start, is not where we end up,” said Robinson said, who has worked in transportation operations from Florida to California to New York City.

She noted that most attendees leave conferences with a notepad full of ideas, but when they return to their home district or company to implement the ideas at their operation, they are often met with roadblocks. The first step, she said, is figuring out Plan A.

This entails answering the following questions: Where do or did we start? Where do we want to be? What do we need to do to get there? How is that going?

Vann-Jackson said when she first started in transportation, the goal was to be fully staffed with an optimally sized fleet. She said sometimes that goal was achieved, but then the pandemic happened. The hope for a fully-staffed transportation department went out the window.

She explained that from a routing perspective, two main constraints of transportation are on-time arrival and student capacity. At the start of this school year, the transportation department that she overseas routed for time and capacity. However, she quickly realized that enough money and drivers hindered that routing plan. Then she said, transportation was at a standstill and could only accomplish some of its original goals due to barriers.

When discussing what an ideal operation looks like, audience members shouted out that they wished they could have more time between routes, perfect sunny days, no potholes, no obstruction of driver vision, and no crashes. Anderson added that a perfect operation would be one that always has support and understanding from the administration and the community in addition to funding. But also, the perfect operation operates with more technology. In terms of contingency planning, operations would also be proactive and not reactive.

Vann-Jackson added that when operations are pressed for people, for instance school bus drivers, mechanics and dispatchers might have to take on that role. That means if a crash occurs, communication between a driver and the dispatch team could be affected. Plus, if mechanics are on a route, inspections become a secondary priority, which delays preventive maintenance.

Plus, she added that training becomes impacted because there are not enough people. Or if an operation is struggling to employ enough drivers, positive staff recognition could become interrupted, which could impact employee and department culture.

Robinson asked the audience to partake in an exercise to illustrate the importance of ensuring priorities are realized. Draw a circle, she explained, and write inside what is most important to you in the circle, cutting it up like a pie. She noted that her circle would include her family, love of travel, her spirituality, and her career. Then, she told attendees to draw another circle and honestly write how much time is spent on each important item. She said she found that 80 to 90 percent of her time was devoted to her career, while her main focus should be on family. So she needed to make adjustments. And student transporters can do the same when examining their departmental priorities.

Robinson noted that the industry has traditionally responded with “yes” to most any request from parents or school administrators. Even though there are not enough staff members to accomplish the job, or the bell times aren’t desirable. Still, student transporters find a way.

“But what happens when we say no?” she asked. “What can we do to change that? What’s the worst thing that can happen?”

That’s where Plan B, C, or D can come into play. As long as student safety isn’t negatively impacted, she explained that it’s okay to retry an old solution that didn’t work the first time because the factors may have changed. It doesn’t necessarily mean a previous attempt at a solution was a bad idea, but it might not have been the right idea for the given situation at the time. Ask questions: What works? What could work? Why didn’t it work the first time? Try it again anyway, try it with a different team, try it on a different day of the week, she added.

Instead, Broken Arrow Public Schools looked at what it can do with the number of resources it does have. Vann-Jackson also advised providing alternatives to asks that aren’t realistic.

Robinson added another option is to say no for now but also provide detail on what is needed to resume service, for example. She noted that if transportation doesn’t start saying no to certain programs that can’t feasibly be accomplished, drivers will start saying no to working overtime or working during the summer. She said drivers are burned out.

Vann-Jackson noted that the pandemic was a wake-up call to transportation, as it highlighted the limitations of what can be done to address the driver shortage. She said school administrators listen a little bit more currently to staffing concerns because of the national headlines. The captive audience, she said, has helped her push through new initiatives.

Robinson advised engaging parents and giving them an outlet to talk about their thoughts while also using the time so that transportation can show its limitations. Anderson agreed, adding that engaging drivers and their opinions is another idea.

Anderson said it’s also important to educate the educator. Five minutes to transportation is like hours to someone else, she noted.

Audience members discussed the feasibility of vans and alternative transportation vehicles that are alleviating some stress because they don’t require CDL drivers. Anderson noted that unfortunately, using only a yellow school bus is not always feasible anymore. Other audience members added that parents are driving their children and are reimbursed for their travel.

Robinson shared that while paying parents to drive their students is a good fallback plan, parents need to realize that transportation is actively working to get those students back on a school bus.