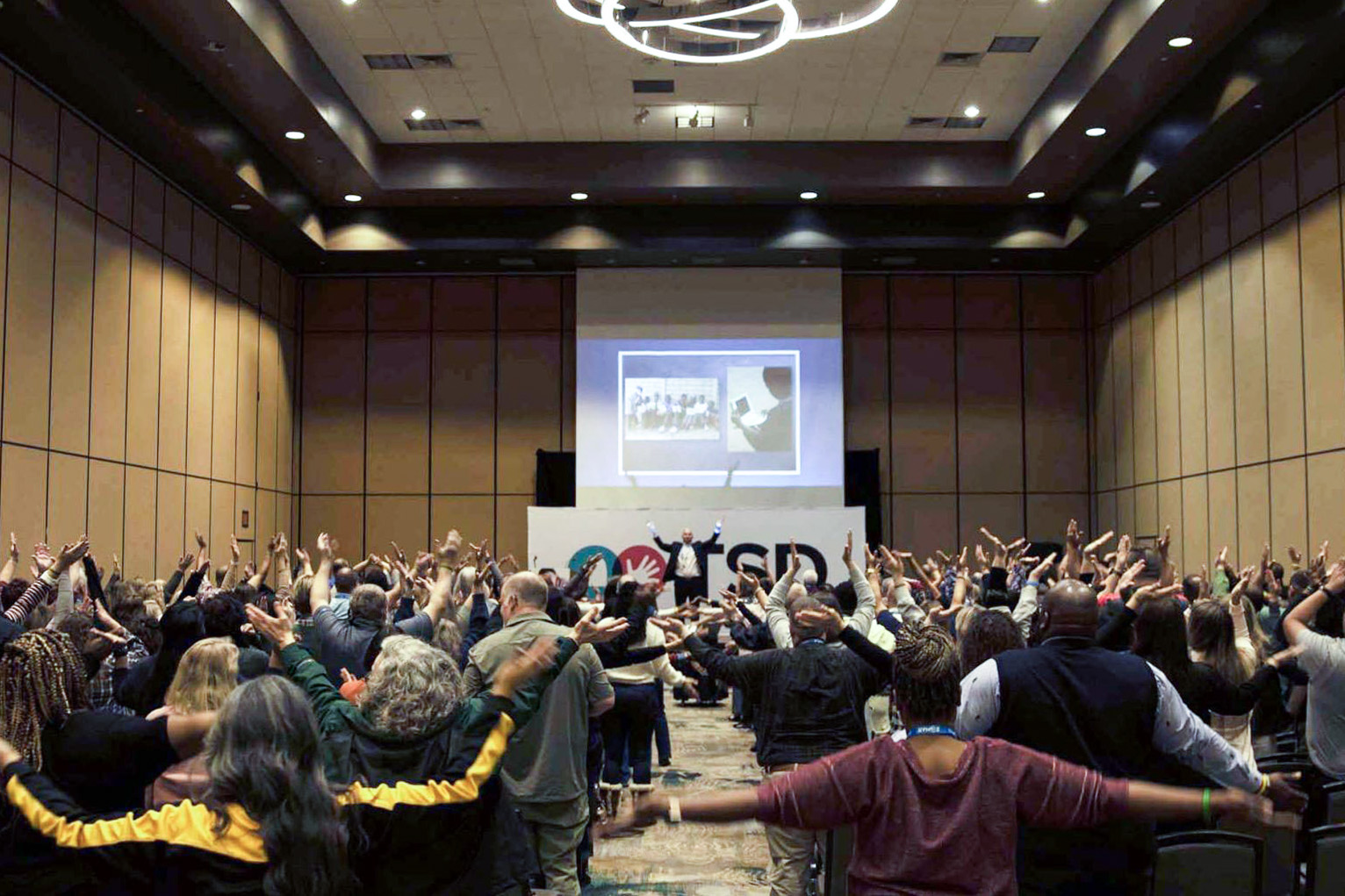 FRSICO, Texas — Attendees crowded into the first keynote presentation at the Transporting Students with Special Needs and Disabilities (TSD) Conference ready to be wowed.

Instead, Patrick Mulick, the assistant director of autism and student independence at Auburn School District in Washington state, “Woo-hooed” the 200 attendees in attendance on Thursday with his engaging presentation, “Creating the Home Field Advantage.” Many attendees shared with School Transportation News that while this is their first time seeing Mulick in person, they have heard nothing but great things about him.

He commenced the TSD Conference by creating a gameday atmosphere as attendees filed through the doors, welcoming them with his booming voice. Music filled the room, pumping attendees up, even though it was early, and the coffee line kept growing. “No one leaves here uninspired,” Mulick exclaimed.

“So much of what we achieve in life is based on the borrowed beliefs of someone else,” he continued, as more chairs were brought in for the group of overflow people standing at the back of the room.

Just like at a professional sporting event, the home-field advantage is when someone believes in you and cheers you on. The minute athletes step onto the playing field or arena, they feel that home-field advantage, Mulick explained. He said this is what students need to feel as well as everyone in the audience.

“If you want to be a champion, you need to create that home field advantage for yourself,” he said, adding that as with bus driving practice or training is required.

For kids to be successful, he said, they need to feel capable, safe, challenged and supported. The same can be said for most adults. As an example, he selected four people in the audience, who he called up to the stage. He announced each person’s name like a public address announcer would in calling out the starting lineup. Mulick encouraged the rest of the audience to cheer them on, give them high-fives, and even create a human tunnel for the selected participants to run through.

There are going to be days where you wake up and don’t feel the home-field advantage, he said. So how do you do that for yourself? How do you get yourself going and excited?

Every morning, he advised attendees to take a minute, look themselves in the mirror, and embrace their culture, values and tradition. To tell yourself, “You got this,” he recommended. He said when one finds that inner voice cheering them on to succeed, they will find the eye of the tiger and be ready for anything.

Mulick advised that if attendees want to create and maintain a positive relationship with students, they need to implement the 5 to 1 ratio. For every one negative interaction, five positive interactions need to follow to positively affect behavior as well as creative positive relationships. Naturally, he said, our brains are wired to point out the negative aspects of people, or the one thing that isn’t going well with their behavior or their work. But to be effective, the 5 to 1 ratio needs to be upheld in all relationships, whether it be in the work setting or at home.

Mulick shared his past, a time before he was a motivational speaker, a board-certified behavior analyst, and the assistant director of autism and student independence at Auburn School District in Washington state. A time when he was “Cheerleader Pat” and a student at Gonzaga University, when he helped form the bottom of the human pyramid at basketball games.

And more often than not, his work went unnoticed, since everyone was staring at the female cheerleaders who Mulick was helping to hold up. Though your efforts may be fantastic, he said, they may also go unnoticed. He noted that is okay, as the pyramid in school transportation is about keeping the students safe at the top and performing at a higher level. Yet he advised that attendees do not simply form the bottom of the pyramid. Instead, there they should see themselves as block that support students and keep them safer, he said

He added that it only takes a couple of people at the bottom of the pyramid who are unsteady for less than desirable results at the top. And if students fall, he continued, they might not recover.

This is why transportation and the entire school system serving as one is so important and integral to student success. He noted that in transportation, the pyramid may look reversed, in that it’s one person at the bottom holding up the rest of the team. Which, he said, is why it’s even more important to be solid and stay connected.

“Were all part of the same team, we’re all working with students,” he said, adding that it’s especially important right now during the pandemic when staffs are stretched thin to stay connected.

In parting, he provided five takeaways that he learned while cheerleading that can apply to everyday life.

Balance. He said that he worked over and over to try and accomplish one skill in cheerleading, which consisted of him holding three girls at one time. After finally perfecting the move, he explained that it wasn’t about how strong he was. Instead, he said it was all about achieving balance. Having the right balance and making sure all needs are met allows individuals to step up and accomplish amazing things, he noted.

Don’t quiet your happiness. When he completed the move for the first time, Mulick said he got excited and celebrated his happiness. However, a coach quickly shut him down, saying there’s no “Woo-hooing” in cheerleading. He explained that students need a positive attitude every day. And if someone tells you to quiet your happiness, he advised ignoring them.

Seek consistency first. Mulick explained that sometimes changes you make can catch people off guard, and they may not be receptive to them at first. But he said to keep going.

Check your glitter. Like glitter, attitude whether good or bad gets everywhere. He advised attendees to ask themselves what glitter they are bringing into work every day. Then, he said, check your glitter at the door because it follows you.

Following the presentation, conference first-timer Holly Cox, assistant to the transportation director for Bellville ISD in Texas, said that Mulick did not disappoint. She shared that she has heard a lot of great things about him and the conference, and this keynote was the perfect start to the week. One takeaway for her was the fist bump.

Mulick demonstrated a fist bump with an attendee with the connotation that he was right there with the attendee, not above or below them in order of importance. Cox added that she also loves the 5 to1 ratio. She’s even performed training with drivers on the concept.

Fred Schilling, safety and compliance supervisor for Plano ISD in Texas, said he felt a lot better leaving than when he came in. He noted that Mulick’s positive energy transformed his mood. Schilling, who is also attending his first TSD Conference, added that there was a lot that came out of the keynote presentation that he will be taking back to his transportation department.